This set of visual math talk prompts is taken from the Math Talk section of Day 4 in the Make Math Moments Problem Based Unit called Planting Flowers Revisited. The purpose of the Math Talk is to reinforce key concepts and big ideas from this problem based math unit including:

Learn more about multiplicative thinking, rates, ratios and the roadmap to proportional relationships through the course: The Concept Holding Your Students Back.

Present the following equations one at a time. Encourage students to describe a context that could be represented by each. All of today’s equations and contexts should be partitive. Meaning, the number of groups (parts) is known, the rate is unknown.

Write an equation and solve using a model of your choice.

Students should use a model of their choice to solve and/or represent their thinking.

Four (4) additional visual math prompts are shared in the Teacher Guide from Day 4 of the Planting Flowers Revisited problem based math unit.

Although you could lead this math talk by orally sharing the context and representing student thinking on a chalkboard/whiteboard, consider leveraging the following visual math talk prompt videos to ensure accessibility for all students. We would recommend that you still model student thinking to ensure student voice is honoured prior to sharing the visual silent solution shared in the visual prompt video.

Show the visual math talk prompt video and be ready to pause once prompted.

In the video, students are presented with visuals and a text prompt to set the context involving an equal quantity of caterpillars stored in large containers plus an additional two caterpillars in a smaller container. 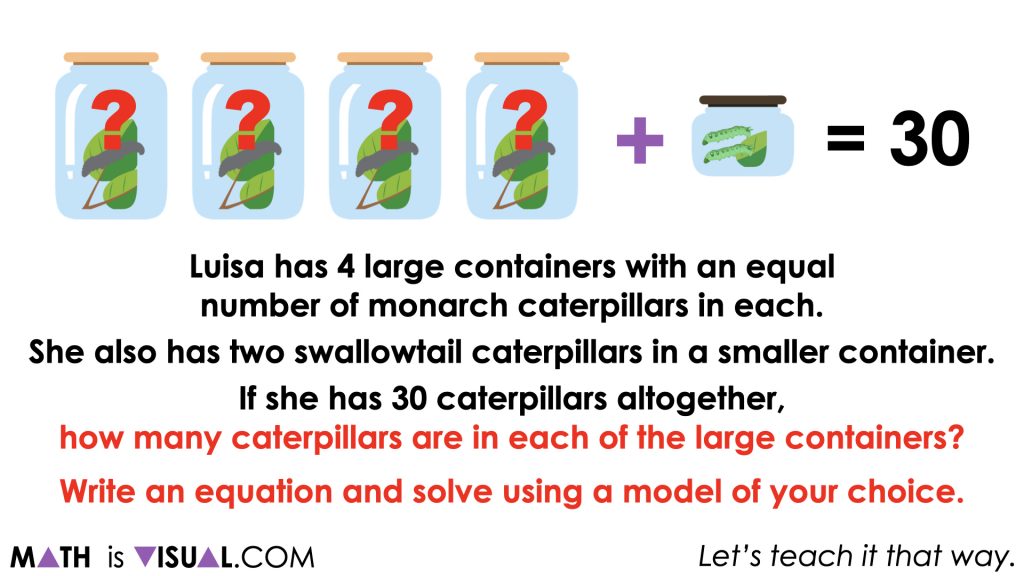 You’ll notice that this first prompt attempts to make this context very visual and scaffolds students toward an algebraic equation that could be used to represent this situation, 4m + 2 = 30.

It is worth noting that this context is going to require the use of partitive division as the unknown variable represents the rate of caterpillars per large container while the number of large containers is known. 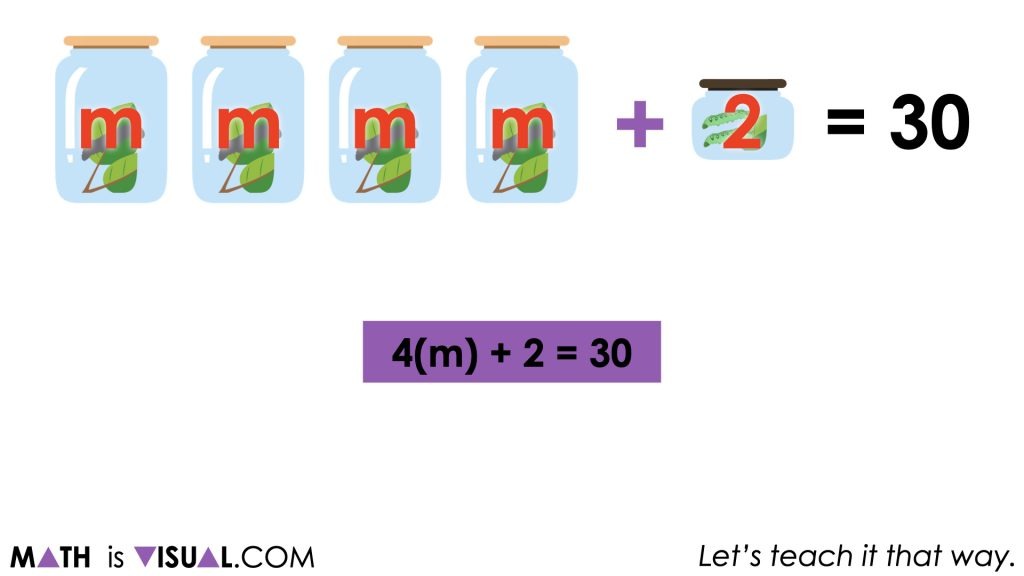 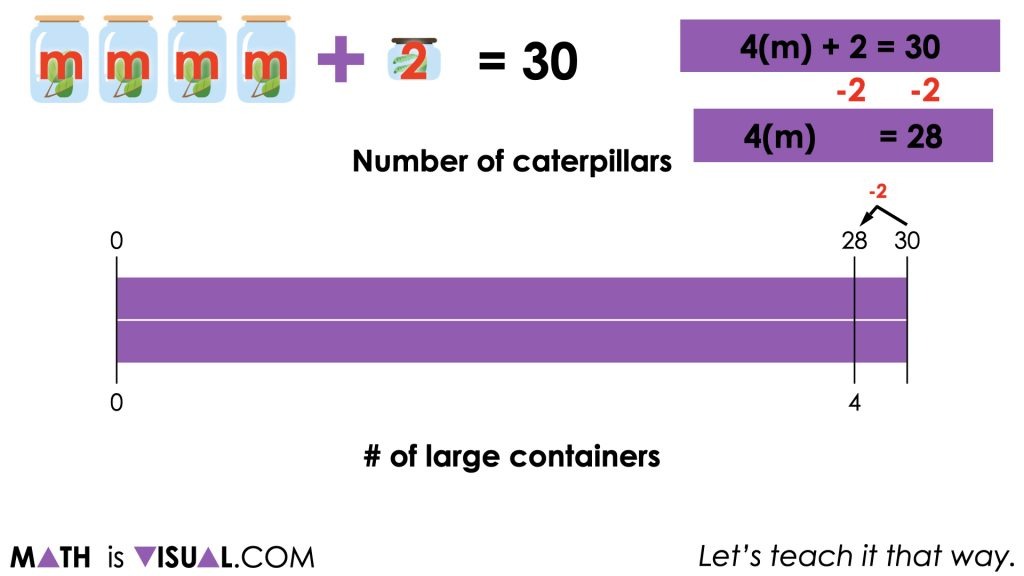 Now that the 2 additional caterpillars have been removed from the equation, we now have a simple one step equation involving partitive division to solve. Some students might choose to scale down by halving twice, or other students might immediately partition the quantity into 4 groups representing the 4 large containers. 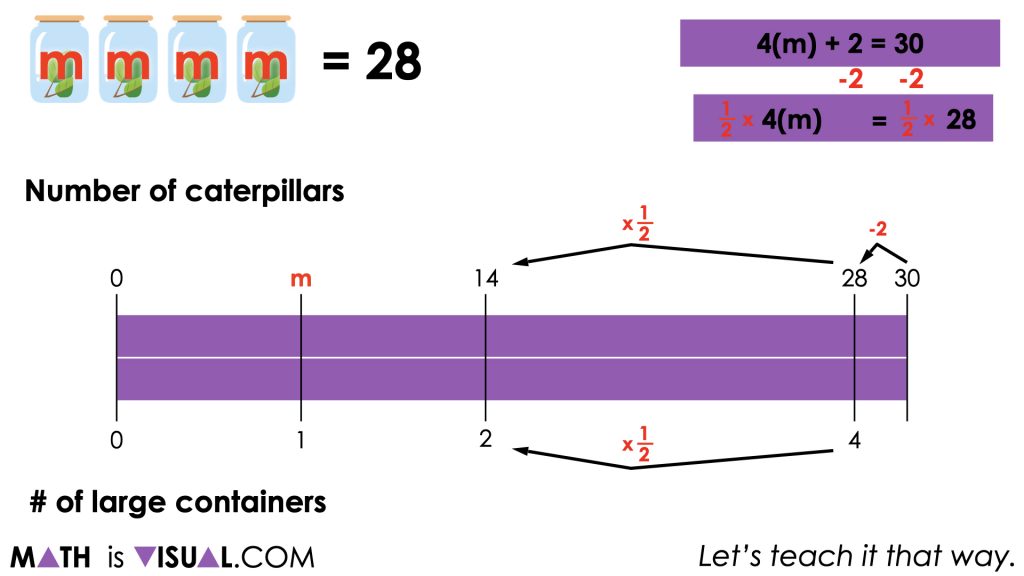 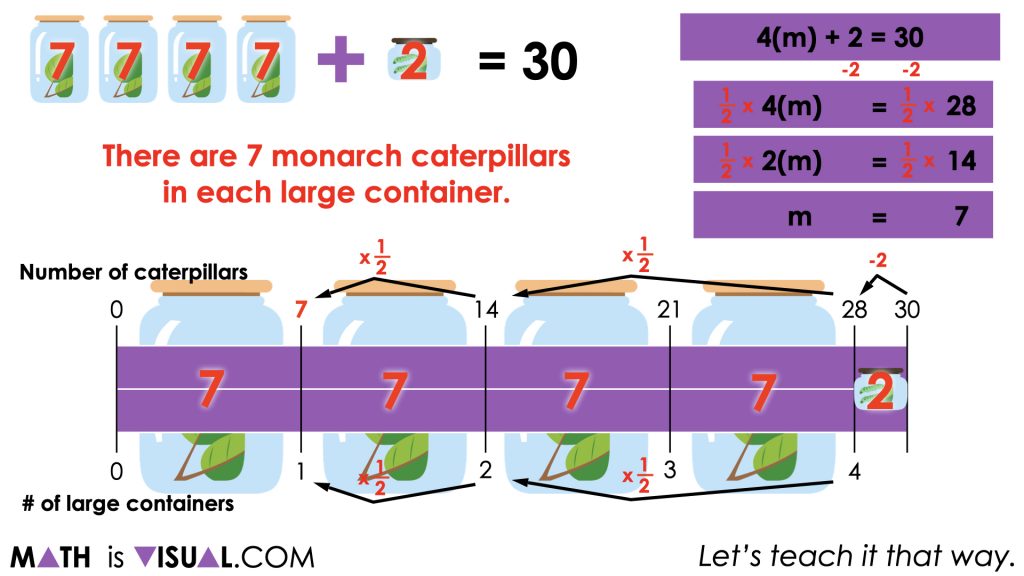 Be sure to ask students about what they notice when they analyze the equation 4(m) + 2 = 30 and the operations they used to solve for the unknown number of caterpillars per large container, m. Some students may be able to recognize that we are using opposite operations to undo or work backwards to find the value of m. Ensure this is explicitly highlighted.

In this next visual math talk prompt, we are encouraging students to start with an equation and attempt to craft a scenario using the same context. 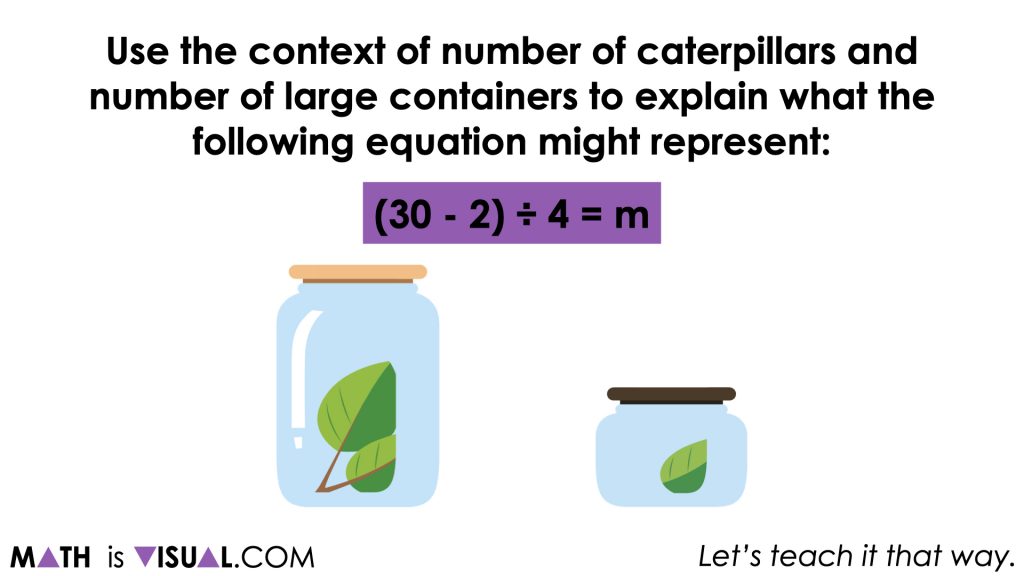 Some students may quickly realize that this equation is equivalent to the equation from the first visual math talk prompt and we can now highlight the use of opposite operations leveraged in the previous prompt (subtracting 2 caterpillars and then dividing by 4 large containers).

Encourage students to articulate what each of the quantities in this equation could represent in this scenario. 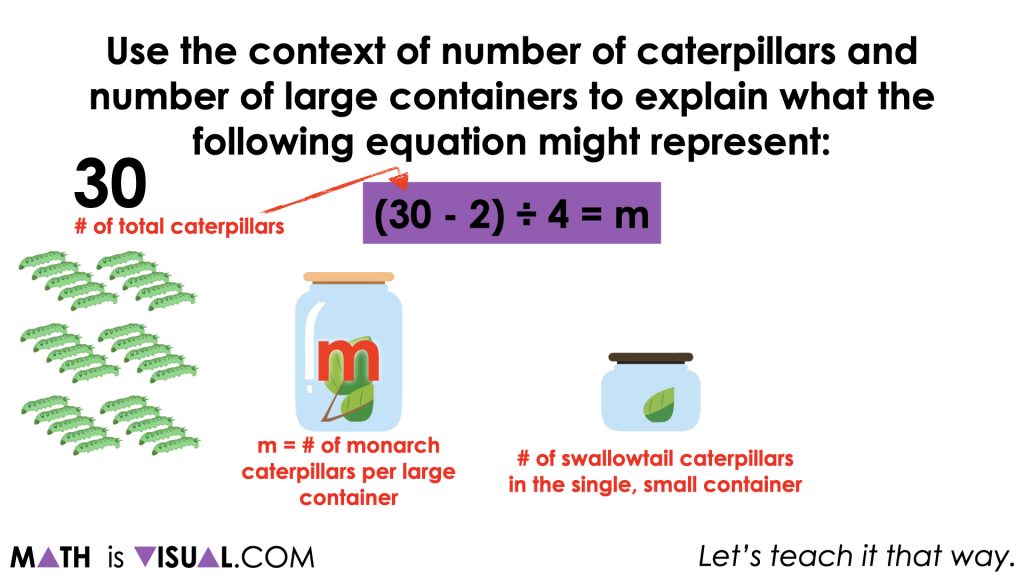 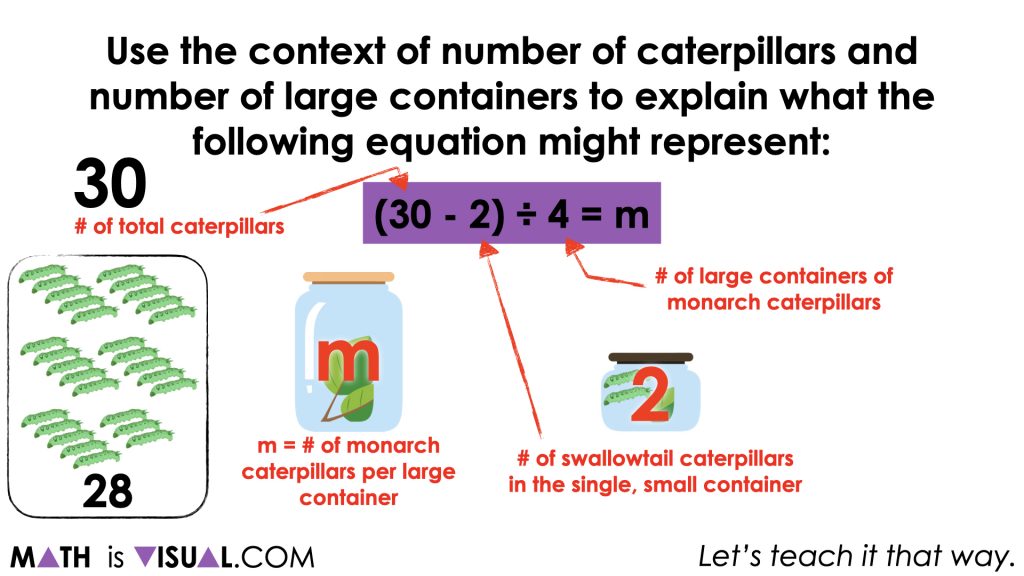 In the visual math talk prompt video, you’ll see the 30 caterpillars being partitioned by subtracting 2 caterpillars to be stored in the single small container and the remaining 28 caterpillars fair shared (divided partitively) across 4 large containers. 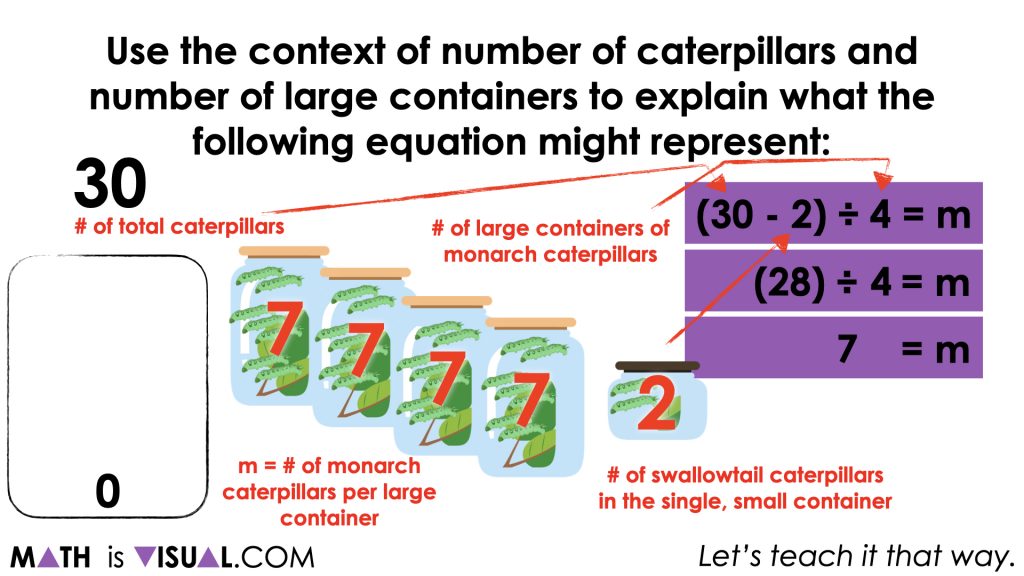 We can also leverage our stacked bar model from the previous prompt to show how this equivalent equation can be solved for m by performing the same operations. 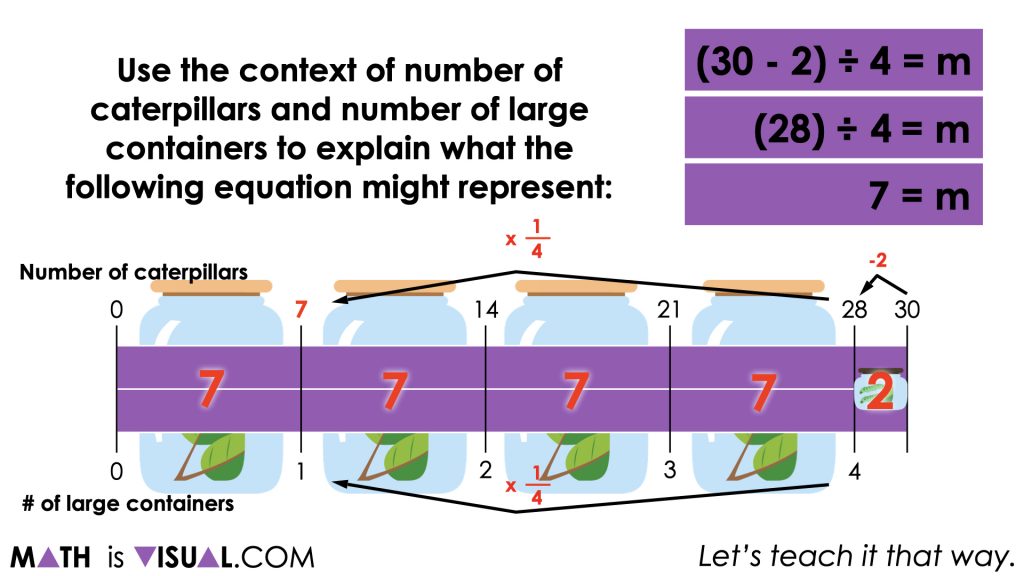 Four (4) additional math talk prompts are available in Day 4 of the Planting Flowers Revisited problem based math unit that you can dive into now.