23,210 views
5 min read
10 comments Watch LaterRemove Cinema Mode
In this Math Is Visual video animation and visual prompts, we will explore whole number quotative division and partitive division - otherwise known as measured division and fair share division - as we get our feet wet to head towards dividing integers conceptually!

In the previous integer multiplication post, I thought that I was ready to move on from integers to other concepts. However, very quickly I had emails from the Math Is Visual community asking when the division of integers videos were going to be released. That set me on a very long journey to uncover and conceptualize integer division for myself prior to attempting to create visuals that might help others better understand division of integers.

So, in the next few posts, I will be tackling the very complex world of integer division from the two possible perspectives: quotative and partitive division. This video and the coming integer division posts will be added to the integer operation series. In this video, we will first address quotative (or measured) division and partitive (or fair share) division with the dividend and divisor both positive.

Although this might seem “beneath” your students if you’re looking for integer division, you really do want to start here because many students do not realize that there are two types of division that can take place. This will be very difficult to understand while also progressing through the integer division concepts simultaneously.

Dividend – A number to be divided by another number.

Divisor – A number by which another number is to be divided.

Quotient – The result obtained by dividing one number by another number.

Quotative Division – When dividing a number into groups of a measured quantity. For example, when we divide 8 into groups of 2 and we want to determine how many groups that will make. Also known as measured division since you have already measured the quantity of each resulting group. When speaking with Zal Usiskin from University of Chicago, he described quotative division as “rate” division since you are dividing the quantity by a rate (i.e.: a quantity per group).

Partitive Division – When dividing a number into a known number of groups. For example, when we divide 8 into 2 groups and we want to determine how many items each group will have. Also known as fair share division since you are dividing up the quantity evenly amongst each group. Usiskin described partitive division as “rate quotient” division since the result will be a rate.

In the video above, we start with whole number, quotative division as a low floor start:

We show that we can approach this problem from two different perspectives:

8 divided into groups of 2

Although the result will be the same number, conceptualizing how the division takes place is very different for both of these situations. 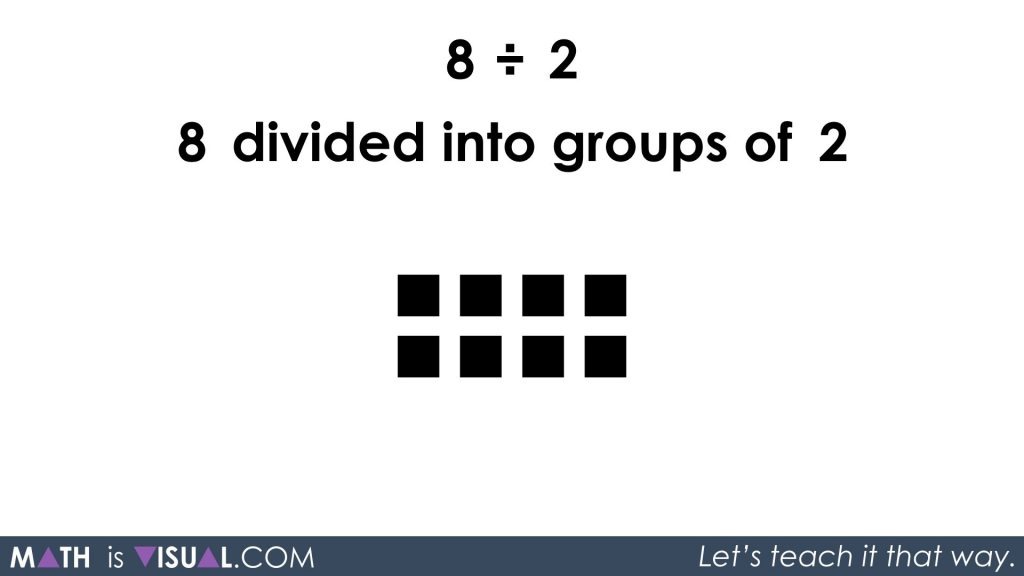 Students may use spatial reasoning to create groups of a set or linearly on a number line. They may also consider using repeated subtraction to repeatedly take away groups of 2 until all are removed (or 0 remain). 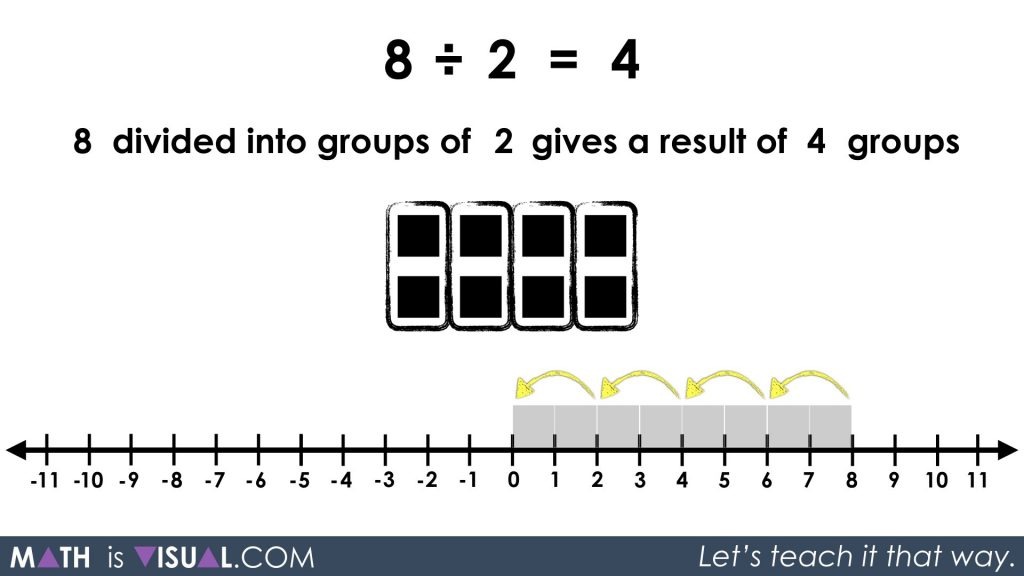 The arrow can also be pointing to the right if students use repeated addition to repeatedly add groups of 2 from 0 until they reach 8.

In the second visual prompt, pause the video at this frame where the viewers are given an opportunity to apply their understanding of whole number quotative division to the following prompt: 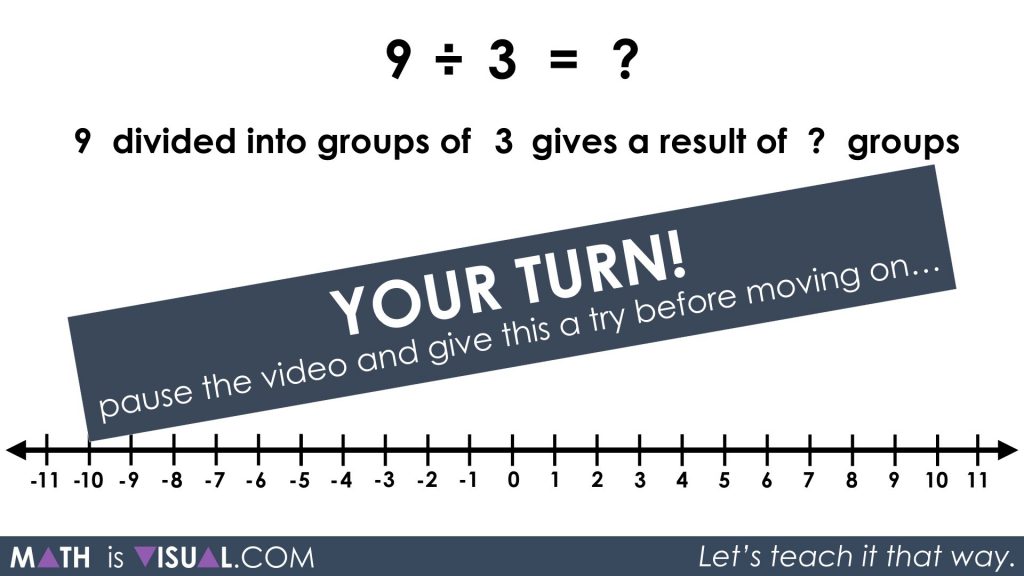 You can then view a visual animation of the solution in the video or reveal this frame: 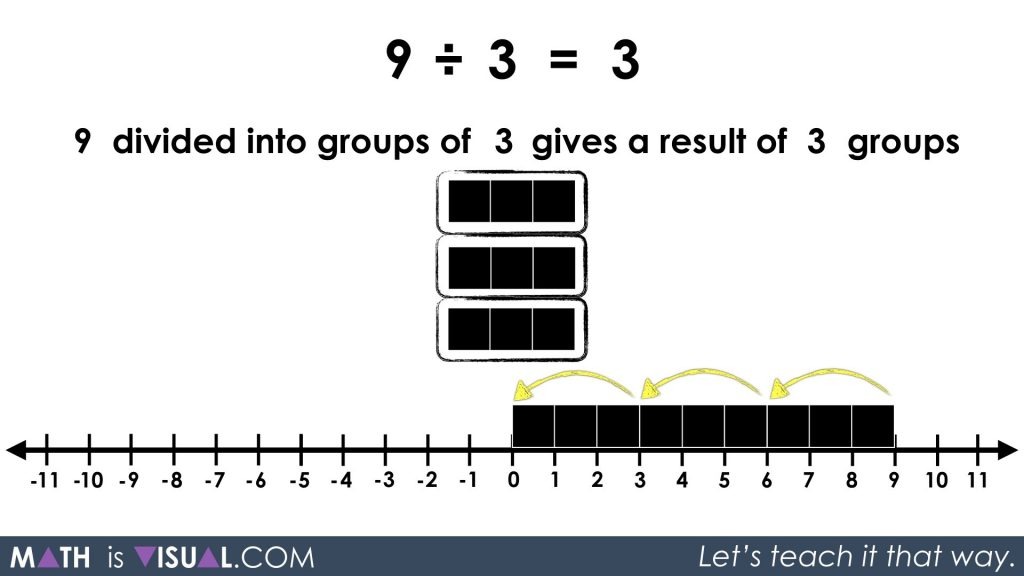 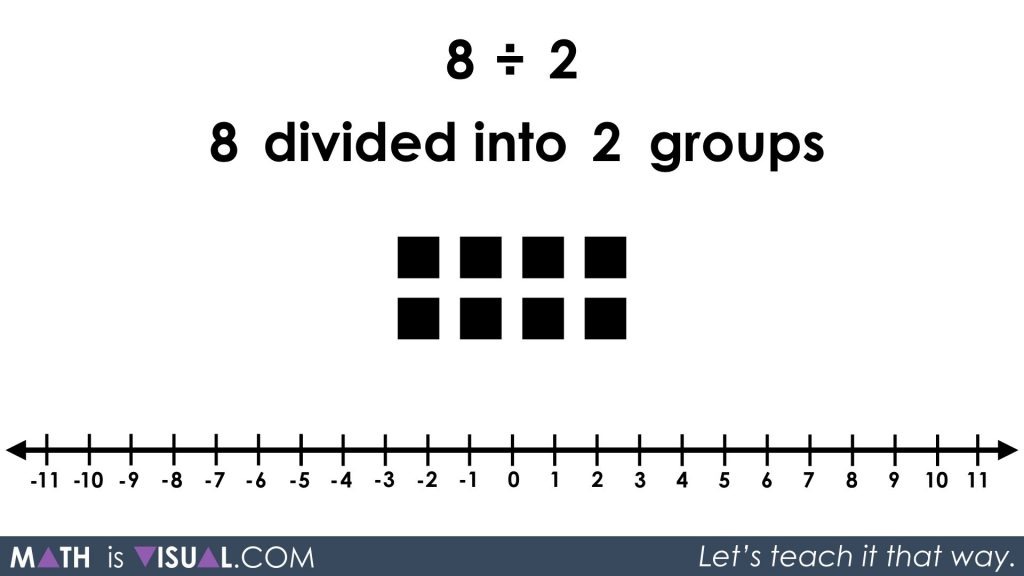 Similar to above, we can approach this using a set or linear model where we are spatially splitting the quantity into 2 equal groups and counting the number of objects in each group. While the visual below may look awfully similar, note that the use of repeated subtraction might be a bit different because we do not know how many are in each group (yet). So, the repeated subtraction may consist of fair sharing 1 object at a time or 2 objects at a time, up to a quantity that a student is comfortable to subitize quickly for sharing out. 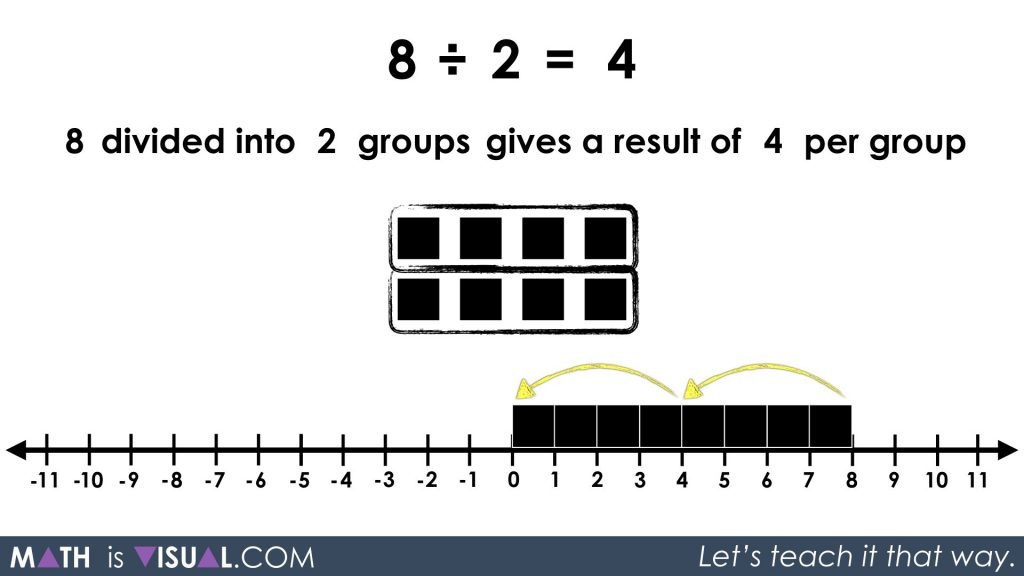 Pause the video and let the viewer apply their knowledge of whole number partitive division using the following visual prompt: 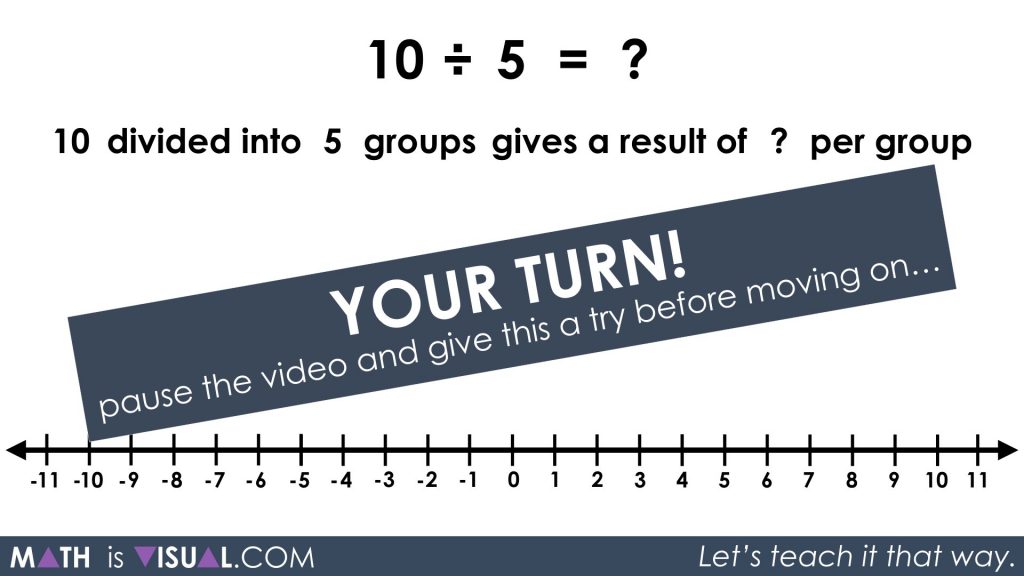 Allow time for the viewer to engage in the partitive division before showing the remainder of the video animation or the following still image: 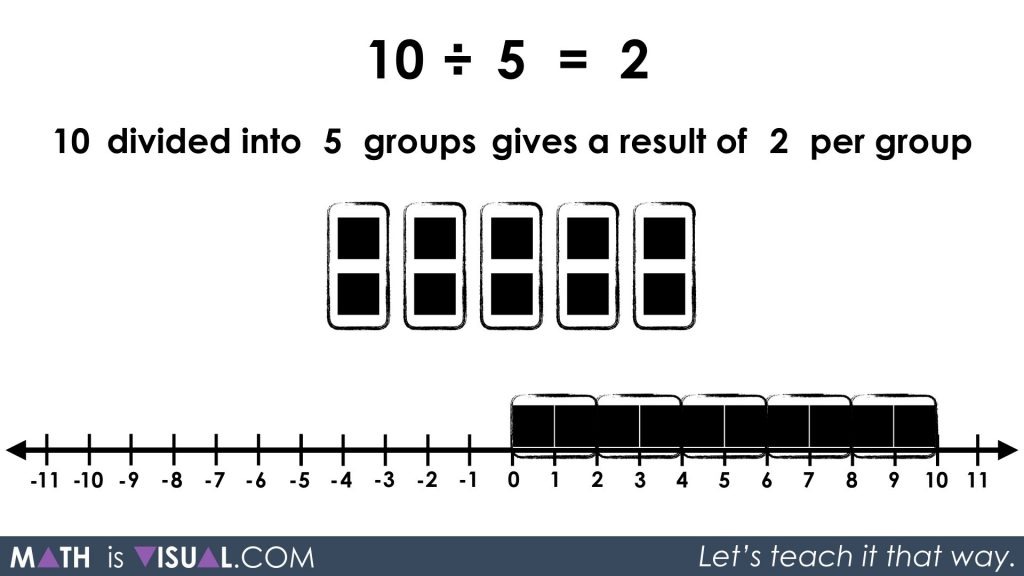 Well, there you have it; quotative and partitive division with whole numbers.

Are you ready to take these two concepts into the land of integers?

It’s coming soon, so watch for it!